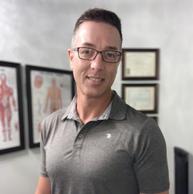 After graduating from Los Angeles College of Chiropractic in 2007, Dr. Cox began practicing in Laguna Woods CA, eventually purchasing a practice in Laguna Beach. After six years in private practice, he returned to his alma mater as a part-time supervising clinician while maintaining a full-time practice.  In 2014, he agreed to work full time as a supervising clinician, quality assurance chair, and part time lecturer.  In October 2015 he jumped at an opportunity to move to Palm Springs.  Dr. Cox has since become a staff provider at DAP Health in Palm Springs and left his full time position at SCU in January 2017, to expand his schedule at DAP, and return to private practice.

A former president of Laguna Beach Rotary Club, and current captain of the chiropractic/acupuncture sports med team for AIDS/LifeCycle,  he believes in “giving back” and looks forward to continuing volunteer efforts in the community where possible.  He and his partner, Brent, commute together from Mountain Center.

Having been a massage therapist for six years prior to becoming a chiropractor, soft tissue therapy is often part of his patient treatment plan. His preferred style of manipulation is referred to as “diversified.” This is the traditional, hands-on adjusting most people are accustomed to; however his philosophy when treating patients of all ages is “use what works”; therefore he maintains many "tools in the bag" that allow greater flexibility in treating a greater variety of patients. This includes drop table, Activator, mobilization and traction. Exercise and stretch instruction may also be warranted. He believes patients need to take an active role in their own healing process.​
​